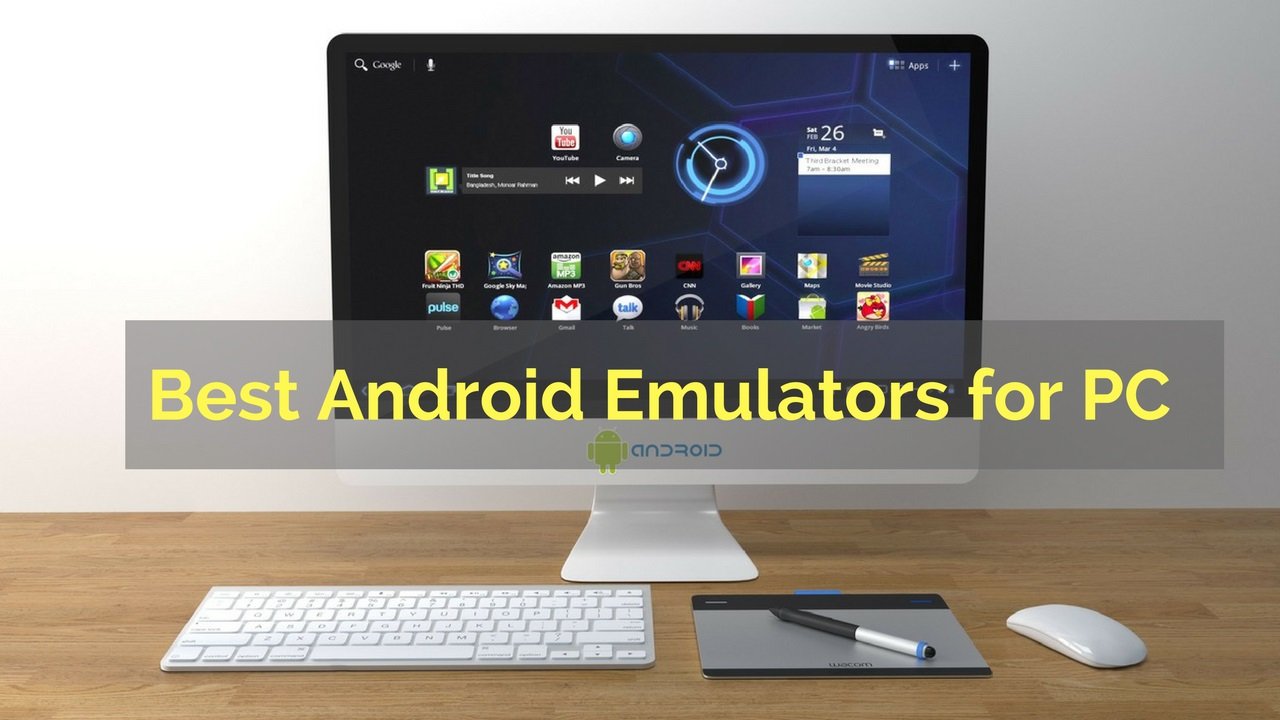 Android emulator for PC or MACs is one of the best emulators for gamers to focus and improve their gaming skills. There are many reasons for emulating Android on your Windows PC because with the help of emulation it is much easier to test apps on-screen or desktop than on a mobile device.

Android developers can debug their app right onto their desktops and gamers can enjoy any game on a bigger screen. Android Emulator for PC is very popular and favorable for players and gamers who want to play mobile games with a larger screen and faster processor.

Generally, it provides a virtual environment, or in other words, it is an Android Virtual Device (AVD) in which you can try or test your android applications on your PC.

Nowadays there are numerous Android emulators present for PCs and Macs. These android emulators are especially for those who are wondering that they have a variety of features available on a single application.

There are three main uses for emulators-

1. The First is for Gaming– Gamers can use emulators on their computers to make some easy to play games. Here, gamers don’t have to rely on the battery life of their devices and the existence of macros and other tricks help the process.

In most cases, these little tricks aren’t illegal (in most games) so nobody really has a problem with it. The best Android emulators for gaming include LDPlayer, Bluestacks, MeMu, KoPlayer, and Nox.

2. The Second use case is Development– Android app and game developers like to test apps and games on as many devices as possible before their actual launch. Usually, an Android Studio emulator is fine for this kind of work.

However, Xamarin and Genymotion are also considered excellent for this type.

3. The Third is Productivity– This isn’t nearly as common because Chromebooks are cheaper and better for using Android apps on something other than a phone and most productivity tools are cross-platform. Any gaming emulator works as a productivity emulator to some extent.

We will pick some best lists of Android emulators for PC that helps to optimize gaming and the great point is that you can try these for free and are easy to install at any android application.

Here are the best Android emulator for PC and Mac-

This Android studio emulator is one of the most popular Android Emulator for PC. It comes with predefined configurations for various Android phones, tablets, Wear OS, and Android TV devices.

According to the working of Android Studio Player, it is the best way of controlling the audio and video files and streams. It accesses built-in media player services like playing, audio, video, etc. This emulator provides various features of a real Android device. It can resemble incoming phone calls and text messages, indicate the location and, other hardware sensors, and many more.

In simple words, we can say that the Android studio emulator controls all the multimedia platforms.

Tencent wants to develop multiplayer games that assets from explicit control, so basically this upgrade in feature further provides a comfortable experience to gaming. And now GameLoop is their new official Android emulator.

It is the latest and the advanced, next-generation feature-rich android emulator for PC.

Some of the most prominent mobile games are present out there, including Mobile Legends and Call of duty, Free fire, PUBG Mobile (one of my most favorite), and many other android games using this emulator with the perfect key mapping. It runs every game smoothly by covering all kinds of the category.

How GameLoop works: For the installation of a Gameloop Android emulator, you’ll need to require 4GB of RAM, a minimum hard disk space of 1.5 GB, and an Intel or AMD processor of 15 or higher.

One of the best parts of the GameLoop feature is, all features come in three different languages, such as English, Chinese, and Vietnamese.

Blue stacks is a fast and very known Andriod emulator, the app player which is designed to enable Andriod applications to run on PCs. It was founded in 2011 in San Francisco California United States.

More than 210 million people around the world are using these mobile games on their PCs. It has a unique platform that combines digital and traditional advertising channels to maximize both in a way no has done before.

However, it is a multitasking emulator in which an ideal game session would last for at least 12 hours and again you should continue playing within, moving anywhere.

Blue stack player has its own Playstore through which we can download the Andriod application we need. You can also download Blustacks 4 High Octane gaming action.

This emulator is especially about games and the interface is essentially a front end for downloading and installing them, but it’s also possible to visit the Google Play Store and search for other apps.

Bliss OS is an open-source Android operating system. It has many features and expanded device support which helps to boost the working of this emulator. It is another effort to experience Android gaming to the computing market covering from smartphones to computers.

Bliss OS player works similar to an Android Tablet in this operating system. Also, the play store is pre-installed and we have to only log in our Gmail account or any account into the operating system, and then we can install and use each and every Android app.

Generally, this Bliss OS emulator is much compatible with every device we own. PC builds include extras for ARM/ARM64 app compatibility.

It offers many custom options for big screens and small screen alike that allows us to set up our device for different tasks.

Remix OS player was first available for Windows PC and it is a computer operating system that was initially released in January 2016 and discontinued computer system for personal computer which is written in C (core), C++, Java(UI).

Furthermore, Remix OS is one of the fastest and most optimized android emulators for PC. For the more devoted games, this emulator has superb features which include a key mapping tool that allows Android games with touch control schemes to be played more effectively with keyboard and mouse.

Remix OS Player will let Android developers optimize their apps for the Android PC/Chrome OS environment because of its mouse and multiple window support.

Genymotion is another Android emulator for PC, which is considered as much smoother to run apps on desktop than any other emulators. This emulator is available for Windows, Mac, and Linux.

It works by creating a virtual machine through VirtualBox to deliver an Android emulator with support for hardware sensors such as GPS, accelerometer, and battery.

This emulator is great for developers because you can test phones without having to actually own them and also we can pick the advice which we want.

Genymotion emulator uses x86 architecture virtualization and open GL hardware acceleration which makes running our apps more efficient. It works by creating a virtual machine through Virtualbox with support for hardware sensors such a GPS, accelerometer.

ArChon is an Android tool that is installed as an extension for Google Chrome with which you can Android applications in your favorite web browser. It is also known as ArChon Runtime for chrome and it has a chromium-browser that can easily run android apps on Windows PC and many other different supported platforms.

This is the first Android Emulator for PC that works on the Chrome Operating system and Chromebooks. Many games and other gaming applications can run on it.

This extension can only load Chrome OS apps which means users are forced to first convert their Android APK files to this format using a small “ChromeOS-APK” app that is built on top of the Node.js platform

Unfortunately, ARChon does not support all the games, but it also comes for Windows 64-bit, 32-bit. It can be used on chrome across various platforms including Windows, Linux, Mac OS.

Basically, it is integrated with Google Chrome.

Nox player is one of the fastest and sleekest Android Emulator for PC and Mac. This emulator gives you a stock version of Android and you easily installed more apps from the Google play store too.

If you are going to use this Nox player, you’ll be fully satisfied with your review because you can use favorite Gamepad and you have options of mapping keys or buttons to perform android indicators.

Another advantage of the NOX player is that it is fully compatible with Windows 10.

This emulator is based on Android 4.2.2 which may be old, but should not create any problem for other apps. These are basically built for gamers by incorporating complete compatibility gamepads, joysticks, etc.

MEmu player is another stunning Android Emulator that has lots of features in it. This software is based on Android Nougat (7.12) by default and can also run Kit Kat (4..4) and Lollipop (5.0).

In fact, according to the compatibility point of view, it has one of the most outstanding features that supports both Intel and AMD CPUs. Obviously, it sounds amazing because this feature is not available on many Android emulators out there.

This MEmu player is most similar to the Blue stacks player or we can say that it gives the best replacement to Blue stacks player. However, this player has the ability to run multiple instances of app and Android versions at once.

The key point of the MEmu player is it supports a 4k gaming experience, which is the best thing that usually gamer wants.

KO Player is another Android Emulator for PC that works in multiple instances and is specially designed with gaming in mind.

Furthermore KO player has two modes such as Speed and Compatability, you can use the Speed option to maximize the Game performance and the other one to fall back on.

This emulator has one more specific feature i.e., a rather neat Multi-Manager tool that lets you run two or more instances of the emulator at once.

But unfortunately, KO Player bit hit, miss and sometimes it crashes even in compatibility mode. Also, it has lots of APKs available to download and can run a large range of other apps.

Android emulator for PC work on the principle of proper platform visualization for both hardware and software. It helps in translating ABI to match the host device. Then the user integrates it with the operating system and runs it like a program or application on their computers.

In any case, Android emulation on PC is possible and much easier than it used to be. Some old favorites either left the space or become unusable (Andy, AmiduOS, and Leapdroid), but everything else here should work well for most people.

Which one are you using and enjoying? Share your experience and views with the android emulator for PC in the comment section below!