Top 10 NodeJS Frameworks For Developers in 2020 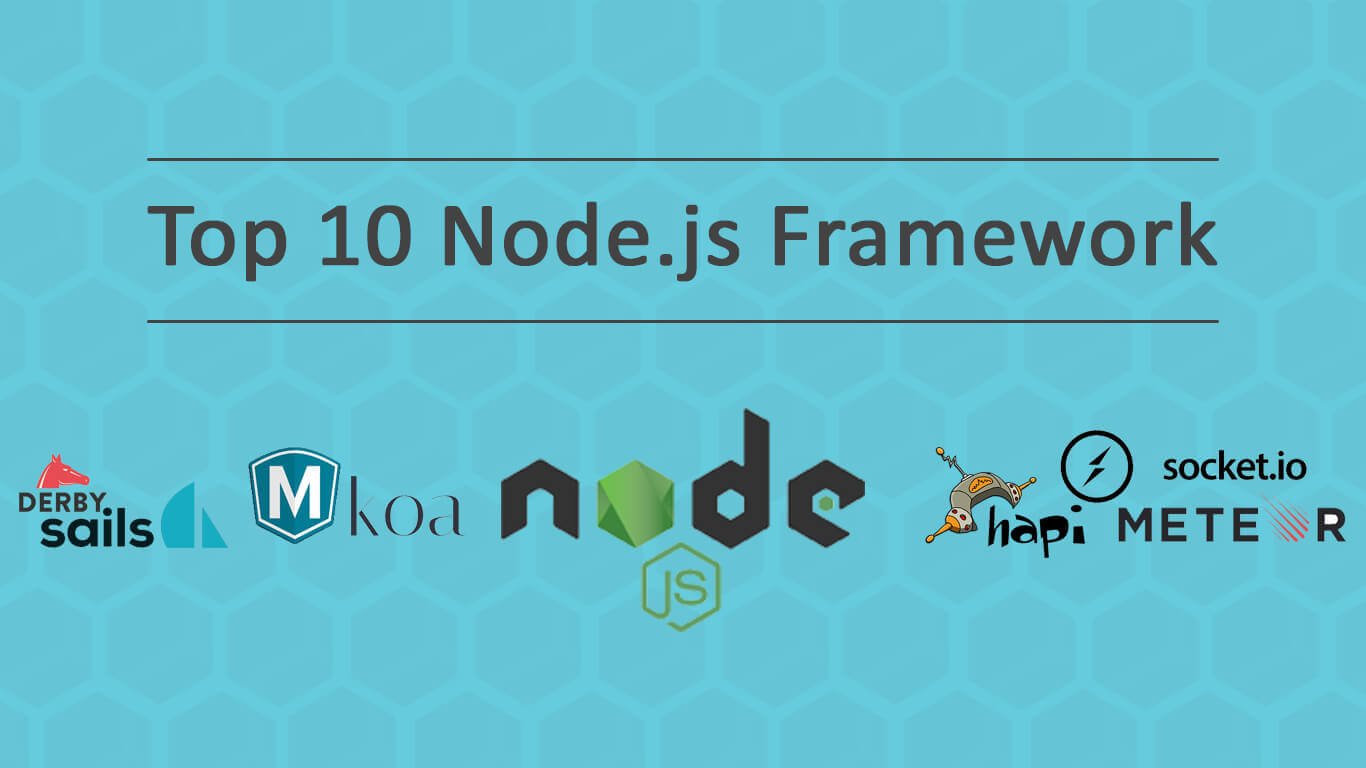 As a developer, one gets to smoothly use the same language for both client–side and server–side scripting and this unique facility has increased the quick adoption of NodeJS frameworks by many developers across the globe in building web applications of any size.

Since it’s been launched in 2009 as a tool for building scalable, server-side web applications it has brought about exponential growth in its usage.

Let’s check out this list of 10 Top NodeJS Frameworks:

Hapi is a powerful and robust framework that is used for developing APIs. The well-developed plugin system and various key features such as input validation, configuration-based functionality, implement caching, error handling, logging, etc. make the Hapi one of the most preferred frameworks. It is used for building useful applications and providing technology solutions by several large-scale websites such as PayPal, Disney.

Hapi is a configuration-driven pattern, traditionally modeled to control web server operations. A unique feature it has is the ability to create a server on a specific IP, with features like the ‘onPreHandler’, we can do something with a request before it is completed by intercepting it and doing some pre-processing on the request.

Express.js was built by TJ Holowaychuk, one of the members of the core Node project team. A large community backs this framework, so it has the advantages of continuous updates and reforms of all the core features. This is a minimalist framework that is used to build a number of mobile applications and APIs.

It’s robust API allows users to configure routes to send/receive requests between the front-end and the database (acting as a HTTP server framework).

A good advantage with express is how it supports a lot of other packages and other template engines such as Pug, Mustache, EJS and a lot more.

It is used for building real-time web applications. It’s a Javascript library that allows the bidirectional data flow between the web client and server. Asynchronous data I/O, binary streaming, instant messaging are some of the most important features of this framework.

Total.js is a modern and modular NodeJS supporting the MVC architecture. Angular.js, Polymer, Backbone.js, Bootstrap and other client–side frameworks are fully compatible with this framework. This framework is totally extensible and asynchronous. The fact that it does not require any tools such as Grunt to compress makes it easy to use. It also has NoSql embedded in it and supports array and other prototypes.

Total.js has some really beautiful versions like the Total.js Eshop, which contains a user interface optimized for mobile devices, and it is downloadable by all premium members. Eshop is one of the best Node.js e-commerce system. This is because of its many versions of unique content management system(CMS).

This MVC framework has become very popular with NodeJS developers and this framework has gained traction through the development of chat applications, dashboards and multiplayer games. It is most famous for building data-driven APIs. It uses waterline for object-related mapping and db solutions. This framework uses Express.js for handling HTTP requests and is built upon Node.js.

Its compatibility with Grunt modules, including LESS, SASS, Stylus, CoffeeScript, Jade, Dust makes it an ideal candidate for browser-based applications.

Sail is highly compatible with several front-end platforms. Developers have enough freedom to their development while implementing this framework.

Derby is an open-source framework based on MVC structure and it is a full-stack NodeJS web framework. Derby is considered ideal for developing real-time collective applications. Using DerbyJS , developers can easily add customized codes and build real-time and effective custom made websites.

One of the fundamentally most used NodeJS frameworks is Meteor.JS. And this list would remain incomplete if we didn’t mention the MeteorJS framework. This is a full-stack framework of NodeJS which allows users to build real-time applications.

It is used to create both mobile and web-based javascript applications.

Backed by a huge community of developers, tutorials, custom packages and documentation, this framework is used to create some great web and mobile applications for only Javascript only.

Loopback is a highly-extensible API framework that allows the user to create such APIs that can work with any kind of web client and can be easily bridged to backend sources. This new age modern application comes with complex integration. With Loopback being an open-source framework, the user can create dynamic REST APIs with a minimum or no knowledge of coding.

Loopback permits developers to create SDKs and API documentation. This is possible due to widget-API explorer that comes in default with loopback.

Koa was created by the same team that created Express.js and it is often referred to as the next-generation NodeJS framework. Koa is unique in the fact that it uses some really cool ECMAScript(ES6) methods that have not even landed in some browsers yet. It allows you to work without callbacks while providing you with an immense increase in error handling.

It requires a NodeJS version of at least 0.11 or higher.

Also, it doesn’t pack any bundle of middleware in the core. That makes server writing with Koa faster and enjoyable. KoaJS comes with more options for customization. It allows you to work with applications from scratch where developers can add those features only which they need.

NodeJS Framework is now emerging as the most commonly used development framework for building frontend and backend for web applications. And it is the most preferred environment for custom web development. Let’s check some of the major advantages of NodeJS Framework:

After going through this article, we can certainly understand that the adoption of a particular framework depends totally upon the kind of website and web application we are planning to build. The list is endless but we tried presenting 10 most useful NodeJS Frameworks for you depending on utilization and ubiquity in the javascript community